Making a batch of Santa cupcakes with friends or family members is a fun way to get into the Christmas spirit and celebrate the upcoming holiday season. Even if you're only a novice decorator and have limited supplies, it's simple to use basic ingredients and equipment to make cupcakes that will snatch the spotlight at any holiday party.

There are innumerable ways to make and decorate a Santa cupcake. Below are just a few; for more, try paging through holiday decorating guides or checking out online galleries of Christmas cupcakes.

Make a sweet Santa face by first frosting cupcakes with white vanilla buttercream. Scatter a thick coating of red sprinkles in a moon shape over the top third or top quarter of each cupcake. Put a tassel on the end of the Santa "hat" with an extra dab of buttercream or a mini marshmallow. Then sprinkle sweetened flaked coconut over the bottom half of the cupcake for a beard. Press on a red candy and black licorice pieces for a nose and eyes, or pipe on the features with tinted frosting. 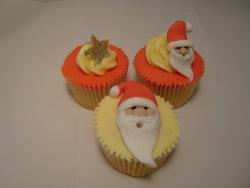 If you're a bit more skilled with icing, try your hand at making a detailed Santa. Mix up a batch of fondant or buy a pre-made tub of the frosting. Using plastic gloves and gel coloring, knead colors into separate balls of fondant until you have a variety of shades to make all the features you need. Press, roll, and mold the fondant to form tiny faces, hats, bodies, and clothing for the Santas. Attach pieces together with a small dab of buttercream, and perch the Santas on top of the cupcakes.

If making a full-figured Santa is too much work, take an easier route by making just a hat. Swirl a generous amount of buttercream onto the top of each cupcake, and put the hat on top. You can either use a very large round frosting tip and red buttercream to pipe on a cone shape or form red fondant into a pointed cone. Top the cone with a mini marshmallow or bit of white frosting.

To play on the Santa theme, consider decorating cupcakes with objects that relate to the jolly holiday traveler. Make 10 cupcakes instead of 12, and put a tiny plastic or fondant reindeer on nine of the cupcakes. Set an edible or store-bought Santa on the tenth. Another idea is to top cupcakes with small chimneys, sleighs, little gifts, letters from kids, or cookies and glasses of milk. Be creative with ideas, and have fun decorating.