There are only a few steps involved in how to make a cupcake cake, and if you've never tried to create one before, it's a fun baking and cupcake decorating exercise that works well for any birthday or party. Cupcake cakes are sometimes called pull-apart cakes, since they're assembled as individual cupcakes that and placed close together and frosted as one unit. These cakes make serving easy, especially for kids, since no cutting or silverware is involved; each guest can simply pull away a single cupcake.

There are two types of cupcake cakes. The first, less common variety is a regular-sized cake baked in a giant cupcake pan and frosted to look like a regular cupcake. This type of cake serves as many people as a sheet cake might and is often presented with a variety of smaller cupcakes for decoration purposes.

The second, more common type is a flat cupcake cake that's composed of many small cupcakes placed side by side. Frost and decorate these cupcakes as a unit, in the same way as a large sheet cake.

How to Make a Cupcake Cake

The process of how to make a cupcake cake is slightly different depending on which type of cake you're making. Each can be decorated fairly quickly and be presented by itself or as part of larger display. 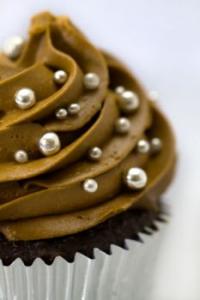 To make a large cupcake cake in a molded pan, make sure you have enough batter to fill both sides of the pan completely.

To make a flat cupcake cake, use a thick frosting such as buttercream. Fondant, ganache, and other types of frosting are less likely to spread evenly over the cake.

A cupcake cake is as unusual cake design that is sure to please any crowd hungry for some sweets.

0
Comments
© 2006-2021 LoveToKnow, Corp., except where otherwise noted. All Rights Reserved.
Resources, Advice & Tips for Covid-19
Read More
How to Make a Cupcake Cake