When you think of the symbols of Halloween, witches and things that go bump in the night probably come to mind. That's why a batch of witch-themed cupcakes are the perfect treat to whip up for a class party, pass out to friends and neighbors, or make for your own family.

The only real requirement for a witch cupcake is a good hat, and there's no better way to create one than with an upside down ice cream cone. The result will be similar to the cupcake pictured above. 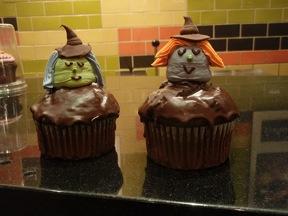 Create a witch's head and face from large marshmallows that are colored and topped with fondant hair and hats. 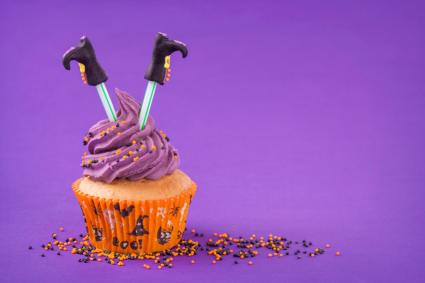 Decorate a fun cupcake that is as creative as it is delicious.

Stat by shaping the marshmallow fondant into black boots. Be sure to hook the tips of the toes up to give them a "witchy" look. If you aren't comfortable with this step, look for black fashion doll boots or check out your hobby supply store to see if they have any premade witch boots. Then follow these instructions to assemble the cupcakes:

Additional ideas for some witchy cupcakes include:

Serve witch cupcakes together on a platter or arranged in a cupcake tree. Decorate the display with bold colors and a painted backdrop of a haunted house or a life-sized black cat. Prop a broomstick against big displays, and play a loop of cackling sound effects for a truly wild, fun, and delicious Halloween party!