If you love cupcakes but prefer the look of a big flat cake, cupcake cake designs are the perfect compromise between the two! A cupcake cake is fun to decorate and easy to serve, since there's no slicing or plating involved. 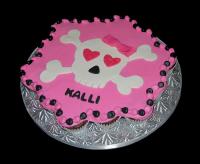 Making a cupcake cake is simple. Just bake your cupcakes as you would usually, but instead of frosting them individually, arrange them together in the pattern you want. For example, if you want a big rectangular cake, you could arrange three rows of four cupcakes each. You can also place cupcakes next to one another in a winding or spiral design to make the finished cake look as if it's one long line segment.When you've arranged your cupcakes in the way that you want, frost them generously. Make sure the frosting carries over from one cupcake to the surrounding cupcakes so that the cake looks like a unit and not a bunch of separate cupcakes. If your cupcakes are domed and you would like them to be flatter, you can shave off the domed tops with a serrated knife or add less batter to the cups when you bake the cupcakes so that they will have flatter tops.

Finally, make sure that you frost your cupcake cake where you plan to serve it or on a transferable, flat surface, since it won't be possible to move the cake around after you decorate it.

These cupcake cake designs are relatively simple to make, but you can use your own creativity to design more complex cakes that correspond to your decorating level. You may even want to try making a stacked cupcake cake or forming small figures from fondant or gum paste to adorn your finished cake. 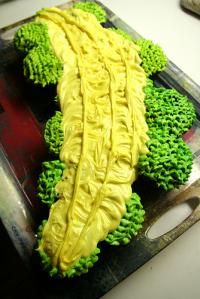 To make a turtle cupcake cake, prepare and bake 12 cupcakes. One will be left over and can be served individually or saved for later. 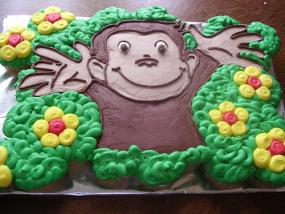 Bake any even number of cupcakes to prepare this large rectangular cake.